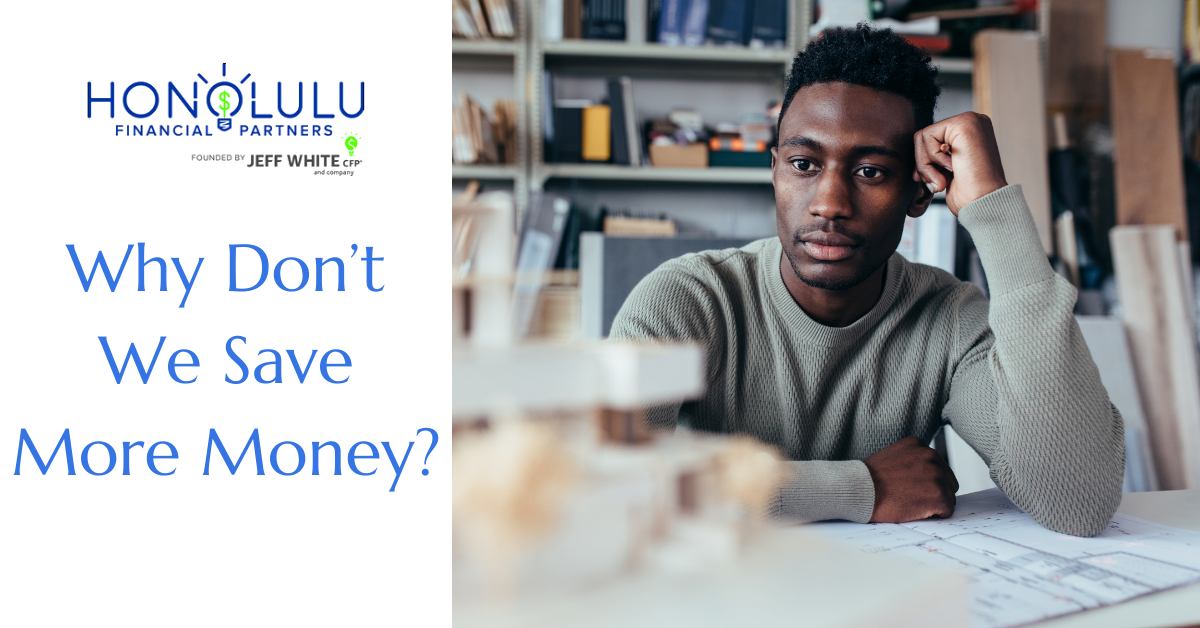 Why Don’t We Save More Money?

Saving, Spending, and Paying Down Your Debts

Americans used to save a reasonable amount of their income.  Unfortunately, now we don’t save as much, and citizens in other Western countries save more. Why do we save less money? And is it different from generation to generation.

Well, to the surprise of most, it is actually millennials that lead the pack in saving money.  Will that continue?  How does that fit into a good strategy of managing your money?

Saving in the U.S. vs. the World

For decades, Americans saved money.  When someone says, “Well, back in my day, we saved …,” that person is actually right.  The decline in savings is relatively recent.

The bottom 90% of American households saved 10% of their income until the early 1980s according to the Atlantic Monthly.  By 2006, however, the savings rate was almost a negative 10%.  People began to spend not only more than they saved, but also more than they could afford to spend.  In 2016, a Federal Reserve survey revealed that 47% of Americans did not have even $400 in savings to use in an emergency.  That is a dramatically revealing fact.

Compared to other nations, workers in the United States are not doing a good job saving for their retirement either.  In fact, we finished 19th in a global analysis of retirement savings. And we lost to a host of European countries, as well as Canada, Australia, New Zealand, South Korea, and Japan in retirement security.

Reasons for the Low Rate of Saving

So, why are Americans not saving as well as so many other, similar nations?

Incomes stopped growing.  Income per capita grew 3.2 percent per year in the 1960s and early 1970s.  By the late 1980s, however, income per capita grew only 1.5 percent per year.  During this period, almost all major industrial countries saw reductions in income growth and in savings.  When income fails to keep pace with inflation, people naturally spend more of their income on increasing expenses like housing, food, and healthcare.

Income rose, but Americans went into debt.  Income began to grow more in the 1990s, but Americans saved less.  It appears that many Americans used the credit boom of the 1990s to take on debt.  Income grew, but mortgages and car payments grew more and much faster.  People put their money toward down payments and loan payments for these houses and cars, instead of saving the money for future expenses or emergency expenses.

Americans simply spend more.  We see a lot of nice things as we move through the day in the United States.  And we want those nice things, so we buy them (or finance them).  The U.S. is a prosperous country, so naturally people want to share in the prosperity by replacing their cars with newer, better ones; by signing up for the better cable TV and Internet packages; or by vacationing in the Caribbean or in nicer hotels in the U.S.

In addition to wanting to enjoy the good life, Americans also seem to value “keeping up with the Joneses.” And sadly, this appears to be a uniquely American phenomenon.  We see our neighbors taking their kids to Yellowstone and we don’t want our kids to feel left out, so we do, too.  Susie next door gets private soccer lessons, so we send our Johnny to get private baseball coaching.  We take more exercise classes, get more manicures, and buy newer iPhones.  Some people spend more to demonstrate that they’re not poor, while others spend more to show that they’re just like the rich.

A recent study showed that younger adults, commonly called “millennials,” save a higher percentage of their incomes than their older counterparts.  Experts think that the inclination to save in this 18-29 year-old group might be attributable to the financial crisis and the large recession that came as millennials entered the workplace.

However, most millennials have not encountered the big expenses that come with having a family. These include the costs of a bigger house, pregnancy, healthy food, clothes, and medical bills, to say nothing of the extra expenses of children.

Another threat to saving for millennials (and everyone else) is the ease with which money is spent.  Credit cards abound, and debit cards can even be used for credit purposes.  With a debit card, it’s easy to dip right into the savings on the spur of the moment. With the advent of Apple Pay, PayPal, and a variety of applications, people can spend money without even opening their wallets.  People can buy expensive Starbucks coffee with the ease of a cell phone swipe, even while they are simultaneously texting and talking on the phone.

The danger to the ethic of saving is, quite simply, the ease of spending more.  How should we balance the use of our money, between saving, spending, paying down debt, and investing?

Working with a Financial Professional

There are two potential solutions to the saving problem: Being wiser with your money and talking to a financial professional.

You can use the old aphorisms, “Waste not, want not” and “A penny saved is a penny earned.”  Simply spending less is good for you.  One way to spend less is to use cash, not a card or cell phone.  This is especially important for those small purchases, like the Starbucks coffee, the Big Mac, or the magazine.  Some people even keep a journal of what they spend and where, to avoid the “wasted” spending that adds up over time:  Too much fast food, too many fancy coffees, and the like.  You can monitor your checking account in the same way.

Then there is the question of saving money vs. paying down debt.  If you have credit card debt at a 16% interest rate, then paying down the debt should probably come before saving or investing your money in mutual funds.

Finally, there is the “rainy day” fund.  It’s important to save 3-6 months of salary to help you if your job is eliminated, you run into an unexpected expense, or both.  You can find quite a few careful people who are glad that they did, because these unexpected events happen often.

A very important step in revising your plan for saving, spending, and debt management is a discussion with a financial professional.  He or she can help you sort out the questions of how much to save and where to put those savings, whether toward your debt, your savings account, or your investments.

Many expenses are important and unavoidable, but there a number of expenses that are not.  A financial professional is a great source for information about how to manage your money.

The opinions voiced in this material are for general information only and are not intended to provide specific advice or recommendations for any individual.

All information is believed to be from reliable sources; however LPL Financial makes no representation as to its completeness or accuracy.

This article was prepared by RSW Publishing.